In the battle of suburbs vs. cities, could both be winning?

Five years ago, I wrote a blog about  changing patterns of urban and suburban growth, inspired by two presentations I’d recently seen. At one, the Urban Land Institute (ULI) had explained why downtown cores could expect a bright future of significant growth while suburban growth would stall. At another, speakers for NAIOP had highlighted a new approach to transforming dull suburban office parks into vibrant mixed-use developments that developers hoped would draw millennials and empty nesters alike.

Five years later, how have those two predictions—very different, yet maybe not mutually exclusive—held up? 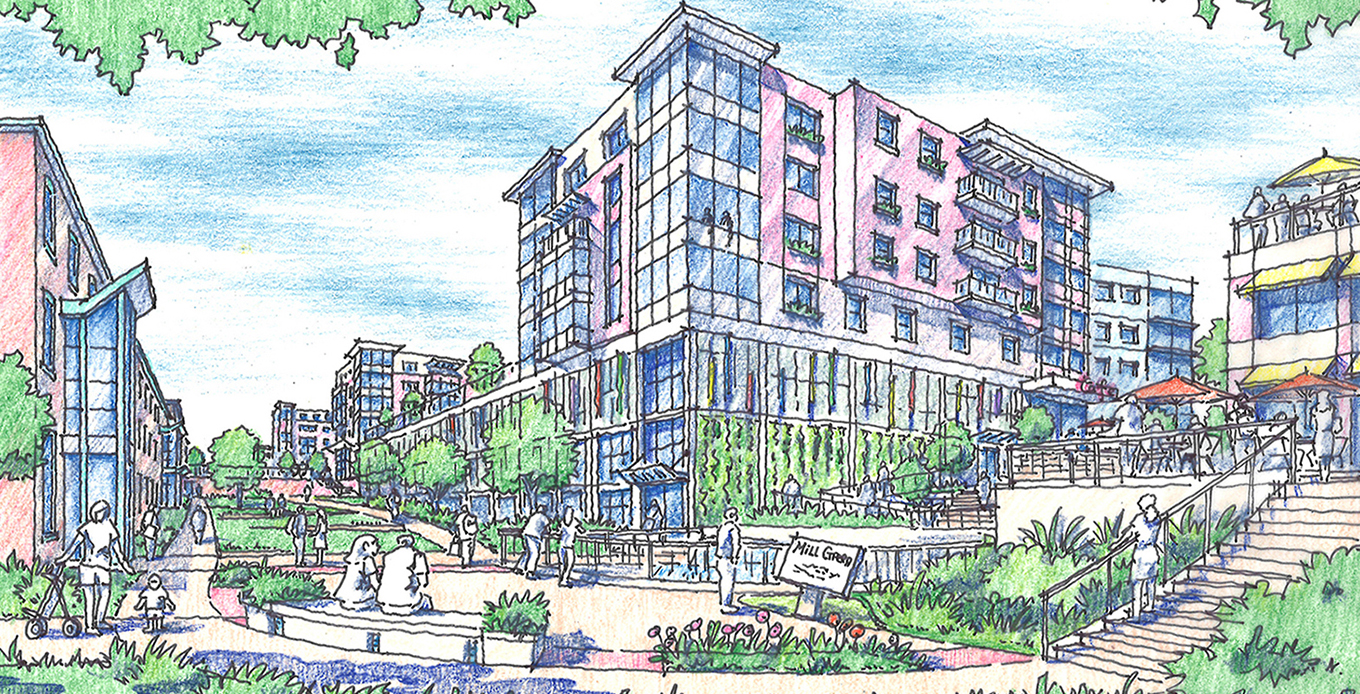 The mixed-use Northland Needham plan in Newton, Massachusetts, will reimagine a strip mall and historic mill into a new main street development.

ULI’s prediction proved to be on target. For example, according to a 2017 analysis of US Census data for Forbes magazine, the core city in 29 of the 33 largest US metro areas grew faster than its suburbs from 2010 to 2015. The same analysis showed sometimes-dramatic increases in educated millennial workers—the Holy Grail of economic development today—moving to cities compared to their suburbs in all 33 metros.

As the millennial generation, born roughly between 1980 and 2000, has reached adulthood, its members have behaved differently than their parents and grandparents. They’ve chosen renting over owning and have shown far less interest in driving. (Both choices result, in part, from higher college debt and the fact that many millennials graduated from college right into a severe recession.)

They’ve put off marriage and had fewer children. And they’ve shown a steady preference for urban living. Survey after survey shows that educated millennials prefer walkable, urban settings. When urban economist Richard Florida recently listed six key qualities for attracting millennial talent, he included “investing in transit and bike lanes, opening up to diversity, creating denser, more walkable neighborhoods, and building quality of place.” All of these apply to cities—and, as I’ll point out, suburbs have started to pick up on that message.

By 2013, large corporations had begun moving out of suburbs and into downtowns in an effort to improve recruitment of knowledge workers, particularly educated millennials. That trend has only picked up steam in the last five years.

General Electric abandoned suburban Connecticut to embed itself in Boston’s innovation ecosystem last year, and these examples have become common across the US, from McDonald’s (suburban Oak Brook, Illinois, to Chicago’s Loop) to Expedia (suburban Bellevue, Washington, to downtown Seattle) to Home Advisor (suburban Golden, Colorado, to Denver’s River North Arts District). Employers now chase the educated workforce that can drive innovation and creativity—one of several lessons we can draw from the Amazon HQ2 process.

Affluence—which in my generation flocked to the suburbs—has done a decisive about-face, heading back to lively, walkable downtowns. We can see a clear indication of this in the housing market. Zillow Group reports on changes in housing values every quarter, and for Q4 2017 it found the average urban home in the US worth $80,000 (or 35%) more than the average suburban home. Urban home prices appreciated faster year-over-year, too: 8.8%, compared to 6.0% for suburban homes.

The makeover of the Dayton Mall in Dayton, Ohio, will create a mixed-use, walkable environment in the suburbs.

NAIOP’s premise five years ago was that not everyone wants to live in the city, and that underused suburban office parks presented great opportunity for mixed-use development that could meet the demand for a walkable experience in the suburbs. That prediction proved solid: Since then, we’ve seen such projects take off across North America.

But I’d argue that where this new approach—abandoning single uses for a mix that raises density, improves walkability, and adds service for all forms of mobility—has reallytaken off is shopping malls. With multiple retailers folding or filing for Chapter 11, mall operators have committed big money to redevelopment, including General Growth (investing $2 billion) and Simon Properties (investing $1.3 billion). Not all these projects will turn a mall into a new suburban center, but many do represent a dramatic shift of vision, like King of Prussia Mall outside Philadelphia, being reborn as a transit-served town center with offices, housing, and a much more walkable design. Stantec’s Urban Places had led mixed-use makeovers, notably in suburban Dayton and Roanoke, where our plan adds new multimodal connections, 760 units of housing, and community green space.

My concern in 2013 was that interest in the suburbs would wane as millennials and downsizing empty nesters headed for the urban core and transit-rich, walkable environments. But I didn’t count on three big developments:

1. Urban housing got very expensive, very fast. All that demand has bid up the price of housing in desirable cities like San Francisco, Washington, and Seattle.

2. The suburbs got the memo. Not all are ready to embrace dense, walkable centers, but increasing numbers are. Prime examples include Tysons (suburban Washington), The Woodlands (Houston), South Park (Charlotte), and Glendale (Phoenix).

3. The mobility revolution took off. Ride-hailing and ride-sharing apps have reshaped mobility patterns in a very short span of time, especially among millennials. Coming right on their tail, shared autonomous vehicles—along with the smart-cities networks that support them—seem set to alter things even more dramatically.

With this mobility revolution, suburban centers will have the opportunity to densify to attract both employers and millennial knowledge-worker employees to their communities. Anecdotes suggest a wave of empty nesters selling their now too-big suburban spreads and moving to the city, but even if data bear out this shift, many of these people want to stay where they’ve put down roots while raising their families. Those communities have the chance to establish walkable downtowns that will prove much more affordable than center cities.

And suburbs are taking note. In Newton, just outside Boston, a strip mall and historic mill converted to office space are being converted into a new main street development adjacent to one of the city’s 10 villages. The mixed-use development will incorporate office, retail, and housing, with a mobility hub connecting to transit, recreation, and other amenities. 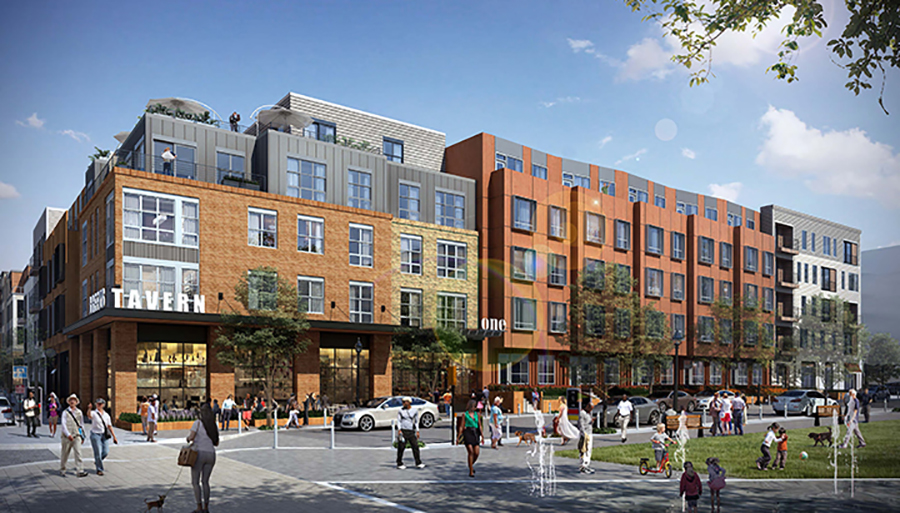 One Charlestown in Charlestown, Massachusetts, is an example of an effective mixed-income development plan that also establishes a vibrant, walkable neighborhood.

Planning with equity in mind

In a striking development since my 2013 blog, the image of suburbia—for decades known as exclusively wealthy and white—has begun shifting to match reality. In an overview of research, published around the time of my original post, Brookings Institution scholars Scott Allard and Sarah Charnes Paisner showed that 60% of the low-income households in the 100 largest US metro areas were already in suburbs. Their book, The Rise of Suburban Poverty, also cited research showing that from 1990 to 2014, poverty grew three times faster in suburbs than in urban areas.

As a result, in many suburbs housing affordability has emerged as an urgent issue. The densification of suburban centers provides one opportunity to address this. The cost of replacing—or even repairing—affordable units in the urban core has emerged as a national challenge in the US. The Boston Housing Authority has committed to redeveloping several centrally located properties, now devoted to housing for low-income families, as mixed-income developments. The designated developers must provide an equal number of new public-housing units, but significantly greater density allows construction of market-rate units that will underwrite the costs of those units. Projects like One Charlestown will provide new housing for existing tenants while transforming mid-20th-century superblock developments into vibrant, walkable neighborhoods.

The changes of the last five years are exactly what gets me out of bed each morning. As the Director of Stantec’s Urban Places, an interdisciplinary hub, I love marshaling our wide-ranging capabilities to address urban issues for our clients. We have a lot of work ahead of us in both the urban and suburban spheres, and the next five years should be very exciting.

I’ll check in with this blog again in five years and let you know how we’ve done and what the next great challenges will be. A new report from the International Downtown Association measures the true value and lasting impact of down...