A post-occupancy evaluation of the eSTEM Academy provides valuable lessons for future campuses.

The design process for the eSTEM Academy in Eastvale, California, brought together a wide array of stakeholders to create a unique facility that would help students develop real-world skills and meet the community’s needs. Nine months after the school opened, designers wanted to know if the campus was working, from the perspective of teachers and students.

“We were really curious about how successful the project is in the eyes of the users,” says LPA Project Designer Stephanie Matsuda-Strand. “We also wanted to know if the goals coauthored by the design team and stakeholders contributed to the students’ and staff’s definition of success.”

LPA’s in-house research team, LPAred, was enlisted to conduct a post-occupancy evaluation of the campus. The goal was to go beyond the standard review to dive deeper into how the campus environments are being used. The study included a representative sample of students, as well as teachers. “It’s one of the first times that we’ve been able to compare how teachers and students are experiencing the campus design features,” said LPAred Senior Research Analyst Kimari Phillips. 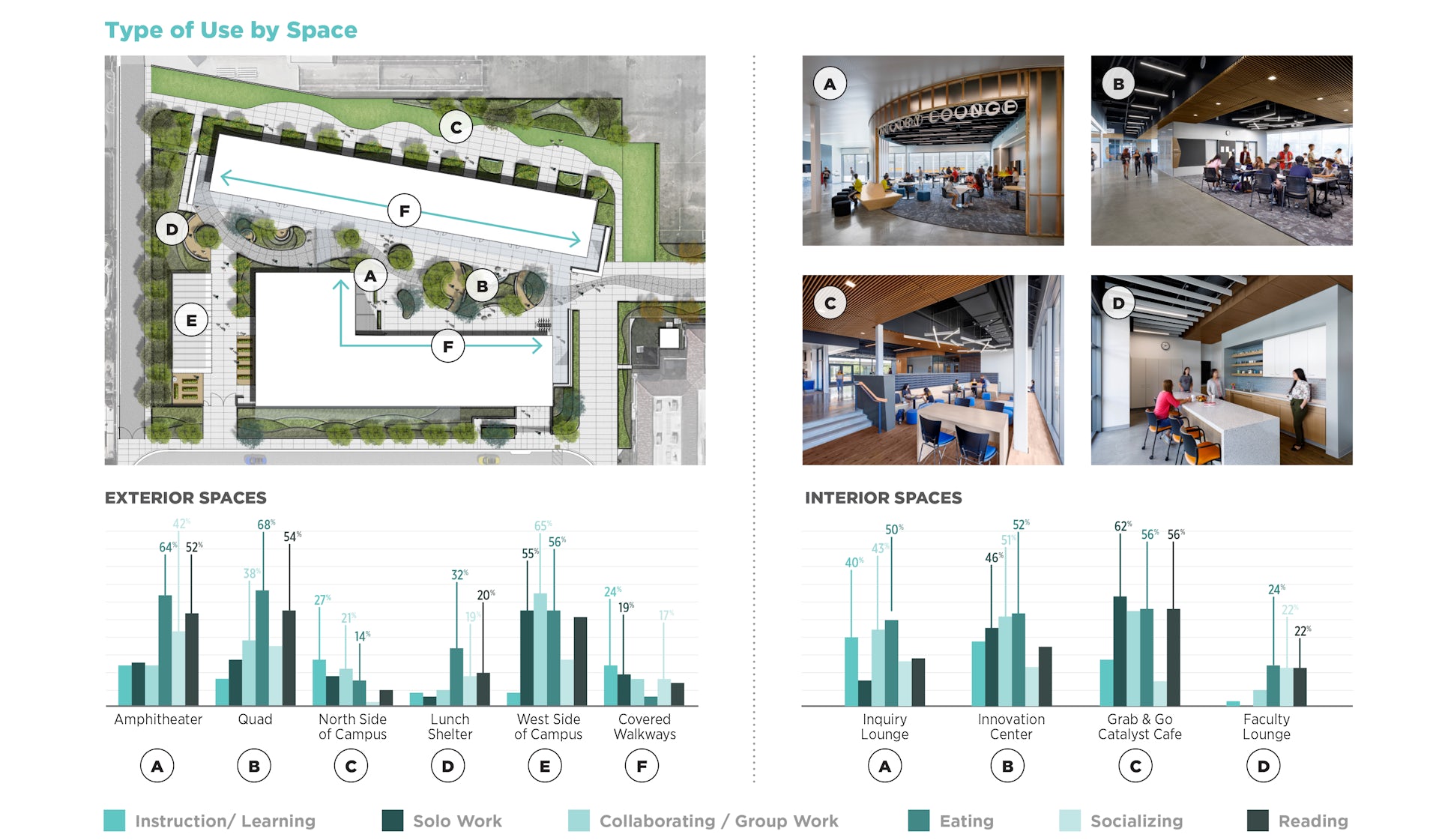 On many questions about the school design’s performance, teachers and students agreed. One hundred percent said they were satisfied or very satisfied with the ease of reconfiguring room layouts for different teaching modalities and activities in the Learning Studios. Both groups cited collaboration spaces and co-labs as the key elements supporting the STEM curriculum, specifically inquiry-based and project-based learning. And they agreed that the new campus could best be described as “energizing and inspiring,” matching another core design goal.

The research found that the school was successful in linking the campus to the community, another key goal. One hundred percent of teachers and 89 percent of students pointed to “building community pride” as a key attribute of the campus. “They really wanted to integrate with the neighborhood,” Phillips says.

The research makes it clear that the students really like the space. Ninety-two percent said the campus is more effective and engaging than other school facilities they have attended. Eighty-six percent said the school “promotes dedication and hard work.”

But the study discovered differences in how teachers and students perceived the spaces. Teachers felt free to use outdoor spaces and the student union, but students didn’t always share that same sense of freedom. “Some of the students didn’t quite know how to use the space, or if they have permission to, so they favored other areas on campus,” Matsuda-Strand says. 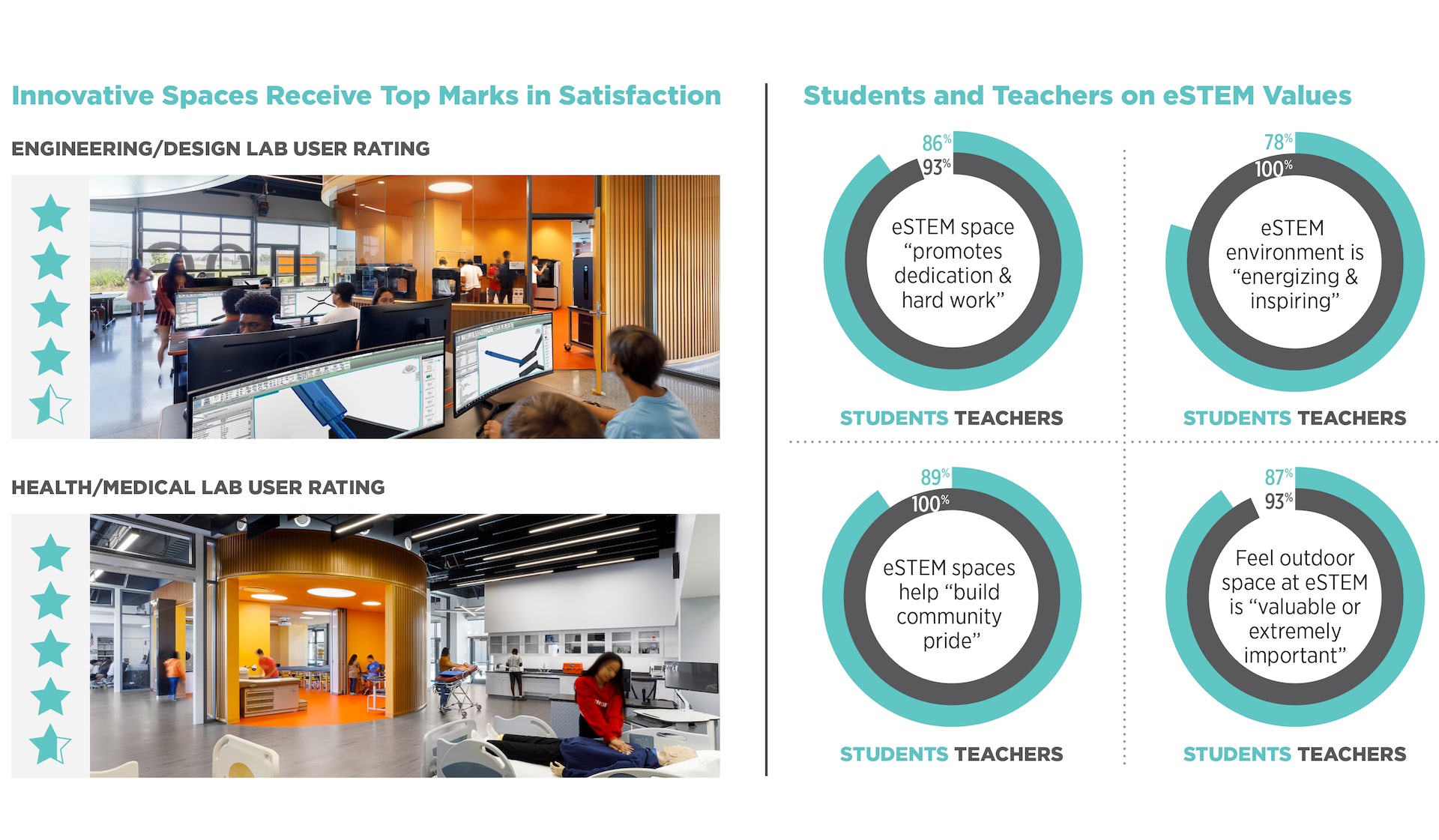 The study also revealed specifics about how different spaces were used by teachers and students. Covered walkways became areas for working and socializing. The amphitheater was a popular spot for collaboration and group work. The grab-and-go café, envisioned as primarily an area for socializing and relaxing, was also one of the most popular locations for solo, heads-down work. The “inquiry lounge” was regularly used for instructional learning. The innovation center was also popular as a social area.

The results suggest that design features promoting a sense of campus connectedness resonated the most with the users, Matsuda-Strand says. “These are elements that we know improve user experience and learner performance, especially in a K-12 environment,” she says. “eSTEM is a great case study demonstrating how a public school district made the commitment and had measurable success.”

Researchers expect to return to the campus next year to conduct another round of studies to comprehensively explore the operations, including building performance data, observational studies of the spaces in use and onsite focus groups and interviews.

LPA believes that sustainability inspires great design—design that’s environmentally intelligent and efficient—yet also visionary, vibrant and life-changing. From K-12 and higher education facilities to civic, recreational, corporate and healthcare developments, LPA delivers design solutions that benefit the environment, improve the bottom line and enrich the human experience. As one of the country’s only design firms with a dedicated research team, LPA draws on cutting-edge data, analysis and technology to shape projects and improve their economic, environmental and social value. www.lpadesignstudios.com